How hard is it really, to apologise or hear someone who is feeling hurt? In reality it is quite simple and yet I feel we make it hard because of our perspective towards it.

When we hear something from someone that requires an apology from us, we usually get defensive and justify ourselves and our actions. More often than not, we convince the other person that we didn’t mean to hurt them or it was not our intention to do it. Sometimes we retort back saying that wasn’t such a big deal to get so worked up about.

So this is what happens, someone comes up to us feeling upset/mad/ sad by some action of ours. Something we said or did happens to hurt them. It hit them hard. Now, we need to understand that they might express it in different ways. Either they are angry or hostile and attacking us or they are sad and upset telling us how they feel about it. Either way what is happening is that, the other person is expressing pain, sadness and hurt feelings, regardless of whether they have the language to articulate it the right way or not.

To simplify it, it’s all about THEM really! They are trying to say that by this particular ACTION of ours. THEY were upset or THEIR feelings were hurt.

What we hear though, is something completely different. Because by now, it’s not really us listening, it’s our ego who is hearing it. Hence we see fingers pointed at us, and it’s quite funny how selective our hearing can become at this point. We hear – “YOU did this or YOU said that, hence YOU hurt my feelings, YOU made me sad, and YOU upset me, YOU are WRONG”. That’s when our ego decides to go on a wild ride. From here on, we have lost that person.

So, it’s really not us. Our reaction has been triggered by a feeling of being criticised or blamed. This person, in this situation was hurt by an action of ours. Another person might not have been impacted the same way under the exact circumstances. All we want to do is to tune into the sensitivity of different people. Not everybody is the same. What we could also do is get curious about NEED or REQUEST BEHIND THE COMPLAINT, rather than take off as soon as we hear words that feel like a personal accusation. We should ask: What’s really going on? What is he/she needing now? That’s the difference between seeing the other with the EYES and seeing, hearing & feeling from the HEART.

Moreover what is really a complain? It’s a plea to be SEEN or HEARD.

When adults express such feelings they are in fact tuning into their inner child. All they want is to have their pain validated, to feel seen and heard for who they are, with all the dents and bruises on their heart.

Moreover, an apology needn’t be expressed only because we did something wrong. We can also be sorry that someone is in pain or they are feeling hurt and just be with them without taking it upon us or blaming ourselves.

I’ve had immense experience being on both sides. I have been the receiver of a complaint and have completely shut the person down many times, because I was truly justified in my action. I believed that my intention was right, and I didn’t mean to hurt the other person, so I had nothing to worry about. In my view the other person was whining and complaining unnecessarily. What I didn’t realize was that there is also something called impact.

Even with the best of intentions our responses always have impact, intended and unintended. When we understand our impact on others, we can calibrate our responses based on what we want to create in our relationships with others.

I have been on the other side too. I would have put my heart out there, feeling vulnerable and expressing how hurt I was feeling expecting to be hugged or held. But the response I received had me walk away feeling dejected and frustrated because I didn’t feel seen or heard by the other. I also admit that not always have I had the language and vocabulary to express what I was feeling. :-). Many a times, by the time the words were out of my mouth, they would have magically changed to blame and criticism.

I have also had the experience of feeling deeply impacted by something a dear friend had said to me recently. It took some courage from my end to express it to her. I was blown way by her response. She stayed, she apologised for what she said, and was deeply sorry, without any justification or self blame. It was done in such a beautiful way ; I felt seen and heard by her completely that I could just completely let of that pain.

All said and done, not always are we going to be in the frame of mind of saying things or hearing things in the right way. Shit happens! We will get triggered many a times. We make mistakes, we aren’t perfect. What we can do however is to stop when we feel things are going in a direction we didn’t intend for it to go. We can recover by beginning again. We can say, “I am sorry, let’s try this again” and we can choose a different response this time.

And we can keep recovering.That’s quite simple to do! 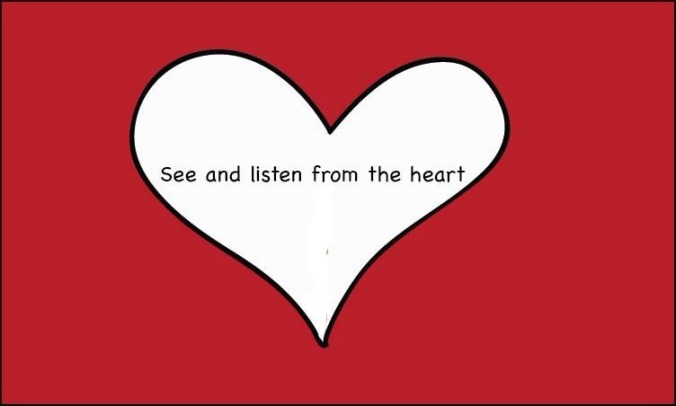